Well, joining the euro and being told how to run its economy has seriously damaged life here and it's obvious at every turn.

Expensive to fly to and with taverna meals only a little cheaper on average than in pubs in the UK, though here on Tilos at least cooked to a far higher standard for the money and with better ingredients, Greece has lost a lot of its monetary competitive edge in the holiday market. 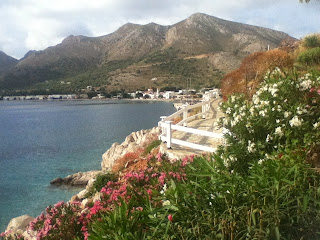 On the other hand, book your own flights and arrange accommodation with local agents or direct with owners, and you can halve the cost of a holiday booked with a travel company. Very attractive studios for 2 with balcony and air con, sea view and simple cooking facilities are available here in May and June for 30 euros a night per room. Above is the view from our balcony: an almost private beach is just below!

At the moment, though, it's hard not to gloat when using the wifi in the bar to check the weather back home. It's wall to wall sun here with light warm breezes and temperatures around 21—24 degC. The restful and relaxed feel to the place comes partly from the fact that the 600+ islanders mostly know one another, partly from the fact that they are very proud of their island and what makes it different. They have an intelligent and imaginative mayor who has banned hunting and created nature reserves and encouraged walking while restricting new building in Livadia to two storeys.

When the hunting ban was announced, hunters from Rhodes announced their intention to flaunt it and came over on the ferry. The islanders formed a human chain to  keep them away and they had to return. That's an island I'm proud to be staying on!
Posted by Unknown at 02:25