Well, somehow a trip to another island challenges and potentially changes so many preconceptions. True metaphorically of life in general, of course.

So heading to Nissyros on the ferry – for an overnight stay and an early start to see the volcano before the day trippers arrived from Kos – proved something of a culture shock. Tourist tat lines the road into the port town, and you just don't see that kind of thing on Tilos! We hoped to bus up to the crater's edge village of Emborios but I found the idea of a 7.30 bus departure after no breakfast a bit too much of a good thing and we hired a car instead. €25 changed hands with no paperwork in sight, and we were off.

And we just made it. The crater and the sulfurous plumes of smoke were truly spectacular. Equally spectacular, from our vantage point down in the 'caldera', ahead of the crowds, was the snaking line of the occupants of eight tourist buses descending the path down the crater's edge towards us: 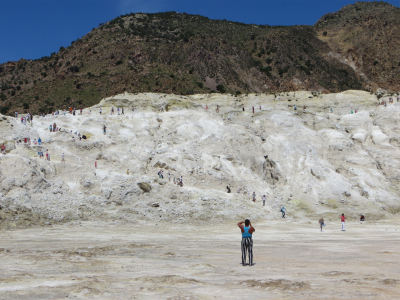 Ironically, having gone under our own steam, rather than being restricted to the stingy 45 minutes allocated to the coach hordes to dash down and scramble back on board, we were able to venture further afield and 'discovered' a second caldera a few hundred yards away which offered a far more exciting and challenging experience, not least because out of the perhaps 300 people in the volcano, we were two of only four visitors to see and enjoy the second crater and its extraordinary colours, shapes and depths. Like a miniature Grand Canyon I guess (I've never been there). 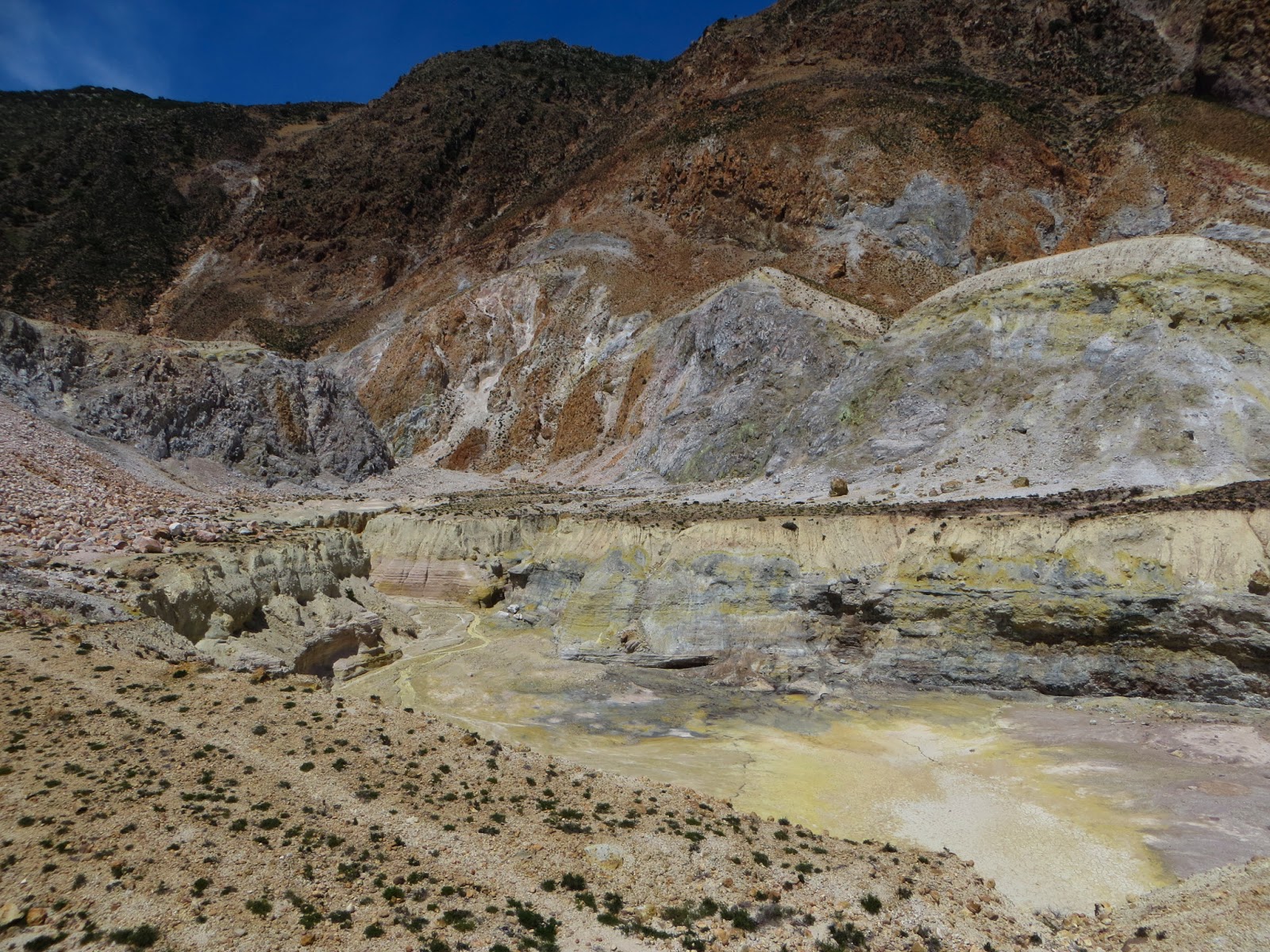 Like Tilos, Nissyros was once densely populated, sustaining considerable populations because its hillsides were lined to extraordinary heights with fertile man-made terraces. Both islands have plenty of fresh water, and in any case the terraces clearly tended to retain what rainwater there is rather than letting it all run off. The terraced fertile strips are still there with their countless hundreds of miles of retaining walls, but the agricultural practices were abandoned in the last century mainly it seems in the fifties and the islands depopulated. Whole villages were abandoned and people emigrated en masse. But these smaller islands have a pride about them, and both the elderly residents and the new young generations of those who stayed on are working hard to make their islands capable of surviving into the future in a responsible way while appealing to more intelligent and sensitive tourists.

Descendants of the Germans who starved many villagers to death and burned out villages where they found resistance to the occupation now come as holidaymakers to Greece and the islands and sail their yachts into these Greek harbours.