The blue box pictured here continues the island theme. In it is a Greek flag. We are on an inter-island ferry in waters claimed by both Greece and Turkey. The (Greek) ferry flies the Greek flag in the port. A few hundred yards out to sea and it is taken down and stuffed into this box. 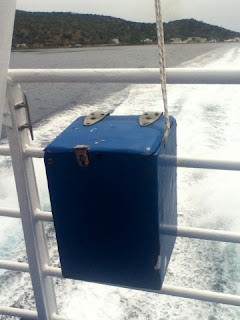 An island has many boundaries.

And from one island the next land mass may be invisible. Or culturally so. On a clear day, looking out from the harbour here at Livadia, a considerable stretch of land pretty much fills the horizon from left to right of the bay. I ask the barman which island this is. He looks puzzled and says he doesn't know. He consults his girlfriend (local born and bred with a degree in business management and the hotel owner's daughter) and they cannot come up with an answer.

So to the Rough Guide and Google maps for a solution. And the answer is very simple. We are very close to the Turkish coast here and wherever you are, on sea or land, Turkey is often nearer than the next bit of Greece. But invisible to the local Greeks.

But they still take their flags down rather than appear provocative.
Posted by Unknown at 13:08