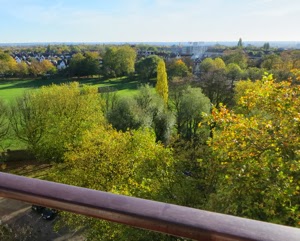 So wrote A E Housman:

Into my heart an air that kills
From yon far country blows:
What are those blue remembered hills,
What spires, what farms are those?

That is the land of lost content,
I see it shining plain,
The happy highways where I went
And cannot come again.

If you asked me for my blue remembered hills, they would not be the Shropshire hills of Housman, nor in fact the North Downs on the skyline of this photograph, though I wandered freely there as a child. They would be the South Downs seen across the Weald from Colley Hill, above Reigate, or from Leith Hill: a span of landscape that includes the birthplaces and workplaces of both sides of my family for centuries. 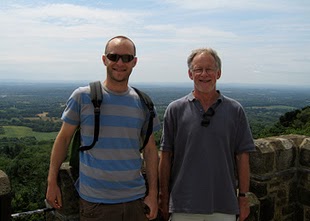 Here they are, blue and distant, behind Ben and me as we stood on Leith Hill tower (the top is just over 1000 feet above sea level, so a mountain in height!) during a great weekend away together in July 2009.

We all have our own blue remembered hills. When Dennis Potter gave the title to his television play, I assume he was thinking of the Forest of Dean. Potter reads the poem at the end of the play, and while you can watch it in seven videos uploaded on YouTube, you can cheat and jump to the last part here and enjoy his voice and his Forest of Dean accent. And reflect on the adult children in the play.

Such hills are not a cause for melancholy. We are not the happier for wanting to re-live the past. It's more a question of living the past into the future, holding a present moment that is in a creative and moving space between the two.

I love hills and mountains.
Posted by Jon at 09:08 No comments:

A couple of years ago a friend who then managed the Blackwell's flagship bookshop in Oxford told me how he had to restrain his staff when they found customers scanning books.

If you are not up to speed with such things, let me explain that what students (and others) were and are doing was not taking snaps of book covers. They use their smartphones to scan the barcodes with an Amazon app which immediately tells them the Amazon price and gives them the option of ordering a book there and then.

So anyone with a reading list can go into a bookshop, browse… and make their choice. They save money literally at the bookshop's expense.

Hence the anger of the Blackwell's staff. The practice threatens their jobs.

This is a problem all booksellers face. I haven't seen anyone actually scan a book in my shop, but I know it's happened at the Woodstock Bookshop.

Then the other day a woman came in and said she was fairly new to the area. She asked me about the shop and got quite sentimental, even emotional when I said it would close in January. She put a cheap book on the counter as if to buy it.

Then she asked me lots of detailed questions about local books. She repeated the names of titles with a concentrated frown as if committing them to memory. When I declined to accept her card for a payment under £10 and pointed out that she could withdraw the money from the post office 25 yards away at no cost, she said she would not do that and left.

You can see how my mind was working. I was certainly hoping she would not come back in the future as I really don't want this kind of customer.

Surprise surprise, though. She came back after a couple of hours and bought the book. Ho hum.
Posted by Jon at 03:57 No comments: