Who says no to a cup of tea at half past six in the morning when this is the view from bed? 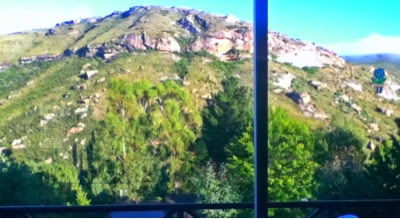 A bird resembling a jackdaw in its behaviour, a starling in its size and with a curious piping whistle has just scavenged the balcony. Pigeons here are lighter in colour but nuzzle up to each other just as ours do. European swallows are plentiful and must soon migrate: what a thought that these just might be the birds that will fly over our houses and fields in a few short weeks. But the weaver birds with their extraordinary inverted nests are like nothing we see at home, which also goes   for the red bishop and the long tailed widow, the latter lolloping through the air with an extraordinary undulating flight. A mix of the familiar and the exotic.
Another trip today to an example of San rock/cave painting. 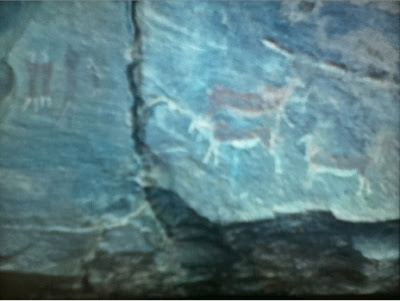 The owner of the farm on whose land the cave lies described these as 'bushmen paintings'. This is not PC. The San people lived here for most of the last 30,000 years, but they lived so lightly on the land – leaving so little physical impact that we can see today – that these paintings 'cannot be dated directly but are probably between 200 and more than 6000 years old', according to the notice fixed to the fence designed to protect them from vandals. The San were hunter gatherers here for all that time until they were out competed for land use by farming tribes moving south through Africa, and murderous white settlers from the south who merely stole their land and shot them. Neither the descendants of those black people, nor those of the whites, appear to show a great deal of interest in the work of their ancestors. The reason these paintings are 'more than 200 years old' is that most of the San had been eradicated by then.
I make no excuse for repeating some of what I have said before. It is a wounding experience to see the remains of a civilisation wiped out so recently after surviving from before biblical times.
It is such a pity that history here is such a wicked tale of greed and murder, when one's experience in the present is of welcome, kindness and generosity on all sides. You might say that I can write this from the privileged and rather unusual position of a white man who is not sheltering behind barbed wire fences, dogs and security gates, but it remains true that South Africa comes across as a country of extremely friendly and warm hearted people.
Mind you, could I not say that of almost any country in the world?
Yesterday we spent the day exploring the Golden Gate national park, partly on foot, partly by car. It is not a park for big game, tho we did see zebra and black wildebeest, but rather for spectacular sandstone rocks and cliffs and massive overhangs that look unbelievably precarious. No elephants here!
Today I read that poachers kill three elephants an hour in this country…
Posted by Jon at 21:20