More wine bargains at the Co-op 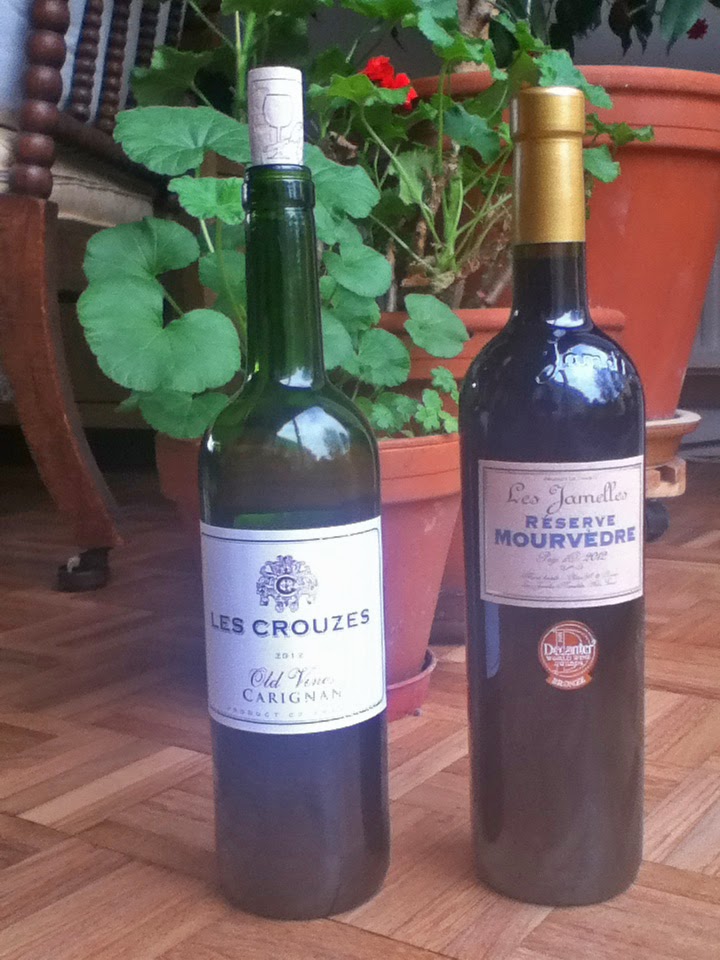 I really know next to nothing about wine, but I know what I like. Here are two wines from the local Co-op. Les Crouzes is made from the Carignan grape, an old grape of the western Mediterranean less widely grown than it was, being rooted up in the 1990s after being held responsible for the French wine lake. It's a really quaffable vin ordinaire of the best kind, easy on the brain and stomach, headache-free and agreeaby alcoholic. Bought singly, it's only just over a fiver a bottle in the Co-op. You can't go wrong.

The Les Jamelles Mourvèdre is superior in the ratings, though not really in price. It's OK at £6.99 a bottle at the moment, but I'm mentioning it because it looks likely to be on special offer very shortly. Probably more tannin and a stronger flavour altogether. This 2012 bottle is distinguished by winning a bronze medal in the Decanter world wine awards 2013 (as do lots of wines). They described it as 'spicy, plum and marzipan nose. Deep dark fruit flavours with a gentle floral note finish.' Bright, fun. Well, there you are! Sample it and see if it grabs you, and if it does and it goes down to £4.99…

Wines from decidedly little-known grapes often seem to be better value than the more famous grapes. Anyone can sell a Rioja to someone, however bad it is. Put a bit of gold thread round it and thousands of people will take it to parties. Buy a Sicilian wine from a grape you've never heard of and it's probably half the price of the Rioja and twice as enjoyable.

I hope you didn't miss out on the Co-op's pre-Christmas offer of Wither Hills NZ Sauvignon Blanc for £4.99. Its regular price in Waitrose is £9.99 and a wine pundit friend called the offer embarrassing. An absolutely lovely wine: I've still a few in the garage! It just shows that the offers at the Co-op can be outstanding if you pick the right ones.
Posted by Jon at 05:17